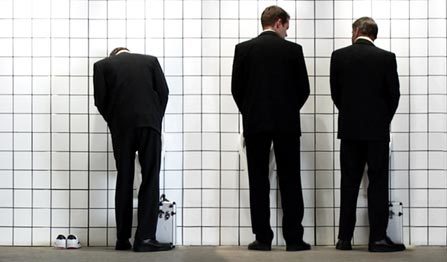 How does it feel to be stared at while standing in front of the urinal? The initial question popped up when picking the subject for the next game-like video production. It was not hard to convince people that it could be a real treat panning the camera in front of a pissoar, “bumping” the image while characters stand there, watch them step to the side and get at each others guts and nerves. There came an idea of a series about the Permanent Tourist, a sans-papiers stuck in the transit zone of an airport wearing shiny white sneakers - a neglected victim that is present only through means of indirect representation. Mode of interaction is that of a 2d-scroll early 80:ies tile-based arcade game.

Don’t Pee On My Sneakers - the Trilogy

...is a series of short movies “pretending to be a computer game”. Set in a public toilet for men, right front of the urinals, the piece deals with male forms of rivalry around space and masculine integrity. It about men-not-performing-properly and about men being exposed to the intrusive scrutiny of other men.

I use game-like video to examine the on-screen choreography of player characters. An inspirational moment appeared to me while I laid out the work with a Swedish game title: “some of the platform games from the 80:ies contained such wacky moves performed by the player character; it felt good just moving the PC around, couldn’t we do a game which is just about that?”.

The study of how characters move, how they walk, how they stand - by themselves or in relation to others, in looped and non-looped phases as well as stylized or realistic representation - is central to me. It is examined through the eye of the camera. Improvisation is used as well as painstaking direction. People tell stories about themselves through nervous ticks or how they place their feet on the ground. By gathering a loosely knitted collective called “Banananose Computer Movies”, I attempt to turn film into computer game logic - with a playability supported by joysticks and lit-up control pads. Characters are filmed in different situations and dissected into animation phases. Video segments are assembled into game-like short movies by a custom-made video player called VOS PLAY. I work also with the Share Studio, the Interactive Institute, as an artist/developer. My work facilitates research (public digital media); projects have been realized and displayed not only in conventional exhibition spaces. Commercial places such as a shopping mall have been used as a backdrop for responsive, playable video.

Based in Stockholm, Sweden – born 1971. An artist and a filmmaker with some years in computer game development, turned (partially) into a software developer. The “game engine” is assumed to be a crucial part of the design process, why I prefer having the proper skills in programming.