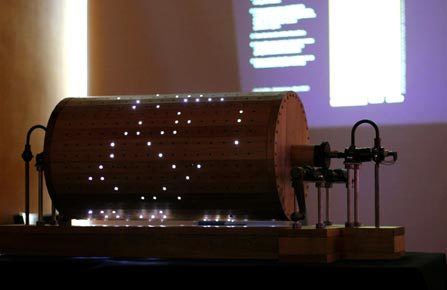 The LED Music Box is a sound instrument that integrates an installation with interactions over the Internet. The physical installation consists of an old-fashioned music box with a crank handle, in which the pins have been replaced with LEDs and the notes with photo sensors for user interaction. Users can draw a shape and pattern on the screen with their mouse and the same pattern of LEDs will light up on the physical music box. Turning the crank handle on the LED cylinder, any sensors that detect the light from the LEDs will make sounds. Data submitted by users is stored in a database and shared by both the online and offline music box. Through the electronic augmentation, users can compose, save, select, share and play their own music.

Jin-Yo Mok is a multimedia artist living and working in New York. He received his BFA and MFA from Hong-Ik University in Seoul, Korea and continued his studies at New York University’s Interactive Telecommunications Program. His artwork has been featured and invited internationally: Artport at Whitney Museum of America; WIRED NextFest; Chelsea Art Museum in New York; Media City Seoul; Korea web-art festival; the Seoul Museum of Art and other online and offline venues. He recently received an artist in residency commission from the Harvestworks Media Art Center in New York.

Gicheol Lee is an interactive designer and programmer who is interested in applying art and science concepts to information and interface design through programming. He holds an MFA degree in Computer Art from the School of Visual Arts, NY and a BS degree in Mathematics from Sogang University in Korea. His experimental web site Typorganism.com received awards from the Communication Arts Interactive Annual and in the HOW Magazine’s Interactive Design Competition. Gicheol currently works as a senior developer at Firstborn Multimedia in NYC, where he develops interactive contents for clients in various industries.

Ahmi Wolf is an Integrated Media Artist and Technologist currently living and working in New York City. Having recently received his Masters from the Interactive Telecommunications Program, Tisch School of the Arts, NYU, Ahmi continues to program computers, invent gadgets and smile. Before ITP, Ahmi worked as a lead developer of interactive performance technology at the Studio for Electro-Instrumental Music (STEIM), Amsterdam. He received a B.SC in Computer Science from the College of Creative Studies, University of California, Santa Barbara. While in Santa Barbara, where he was a researcher at the Center for Research in Electronic Art Technology (CREATE) headed by Stephen Pope and Curtis Roads.