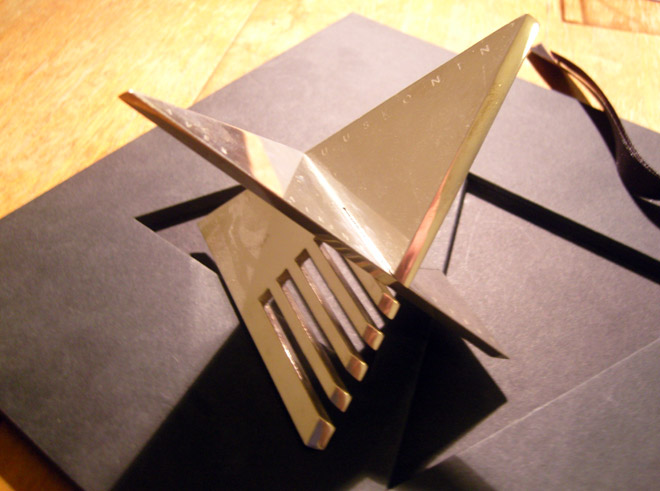 More information (in Finnish) in AVEK magazine (page 66). The magazine also contains an article written by Juha Huuskonen reflecting on what 'creative producing of media art' means (page 24), and an article by Tuomo Tammenpää about Open Source Hardware (page 27).

The Promotion Centre for Audiovisual Culture has given the AVEK award to artist-curator Juha Huuskonen. The award for media art and currently worth EUR 15,000, was given at the season opening of AVEK in Media Centre Lume. The AVEK award was presented for the sixth time.

Helsinki-based Juha Huuskonen (1974) is not only a media artist, but also a producer and curator of media art events. He is a founding member and the first chair of the katastro.fi organisation founded in 1998. In 2000, Huuskonen was one of the founders of Avanto, a festival for experimental music and film, and between 2002 and 2003 he developed Nordic media art residence opportunities together with NIFCA. In 2002, he and Petri Lievonen founded the Pixelache electronic art festival, which Huuskonen has also curated. In addition, Huuskonen curated the Master of Arts Festival (MoA) for the University of Art and Design Helsinki in 2009.

The most recent examples of Huuskonen's own media artworks are Mouse Labour (with Tuomo Tammenpää, 2006–2007), PLAN*B for Arkadianmäki (2004–2005) and Roosa (2002). Huuskonen has also had a key role in the realisation of many other projects. The latest example is the Ars Electronica-awarded environmental art installation Nuage Vert – Vihreä Pilvi by the artist duo HeHe (Helen Evans & Heiko Hansen). Huuskonen created part of the demanding program coding, curated the work at Pixelache and, together with the artists, accomplished a cooperative relationship with the energy company Helsingin Energia.

The AVEK board of directors decided on the recipient based on the nomination of the AVEK award jury. The chair of the jury was Tapio Mäkelä, AHRC Research Fellow at the University of Salford, and the other members were Georg Dolivo, Cultural Director of the City of Espoo, and Päivi Kiiski, Director of Fine Arts and Deputy Director of Turku Museums.

The jury highlighted Huuskonen’s creative producing, seen in his roles as an artist, curator, producer and programmer in the media art scene. His role as a social moderator and creator of the Finnish media art’s production culture network was mentioned in the jury’s statement. The jury also states that the AVEK award presented to Juha Huuskonen is “an acknowledgement of his teams, his organisation and of the communal guts with which the events and artwork of the last decade have been produced.”