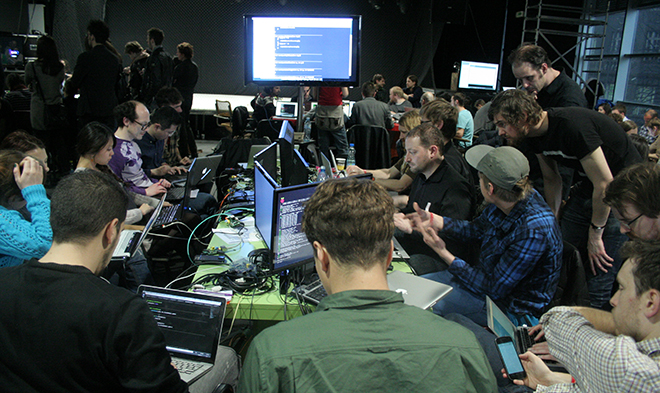 Resonate is a platform for networking, information, knowledge sharing and education. It brings together distinguished, world class artists with an opportunity of participating in a forward-looking debate on the position of technology in art and culture.

This is the second year when this festival is held in Belgrade-Serbia. Resonate festival lasts for three days in March and gives regional european and regional public an overview of current situation in the fields of music, visual arts and digital culture. Guest artists, lecturers and other participants are chosen to represent the cutting edge of the contemporary creative industry in Europe.

Resonate is a relatively new and different festival. By taking a look on the list of workshops that were happening during the workshop day, it is possible to see a clear hands-on approach focus. It is hard to describe the rousing atmosphere in the Dom Omladine during the workshop day. It did not matter if you are an accepted workshop participant or not. So much useful knowledge in one room during one day!

Here you will find an insight in three workshops that seemed the most interesting for us: How I Learnt to Stop Worrying and Love the Drones by Memo Akten; openFrameworks on the Raspberry Pi by Andreas Müller; Jason van Cleave and Imagining Music, Visually and Tangibly, with Free Tools by Peter Kirn.

Drones are robotic flying creatures that are usually controlled by using a computer. Some people are scared of them, some are not, but why be scared if we can learn to use them for our own good? Anyway, it seems that they are here to stay, so better get a better understanding about them than hide while it is still too early to do so. Usually they feature a camera and that makes it possible to use them as flying cameras to shoot videos from complex angles. This feature can also be used for spying on someone but that is not necessary.

Memo Akten, who is a visual artist that has been involved in different kind of digital audiovisual and interactive projects, has used multiple drones in one of his latest projects to create an audiovisual performance called Meet Your Creator that opened the 22nd Saatchi & Saatchi New Directors’ Showcase at the Cannes Lions International Festival of Creativity in 2012. It featured custom built drones and a really expensive infra-red multi-camera system that allowed to control and track drones on the stage very precisely. It is not possible to get such a low level control with the ARDrone2.0 that was used in the Resonate workshop. Anyway, by using tools like Kinect, it is possible to create similar effect as in the Meet Your Creator but in a smaller scale.

Workshop participants with quite different backgrounds tried to use openFrameworks and other creative coding tools to make their own applications that would be then used for controlling one of the drones available on location.

Memo has made an addon for openFrameworks that allows relatively easy migration to the drone controlling world if you have some previous openFrameworks experience. It is not fully complete – it still misses data retrieval functionality that would allow to access the drone sensor data directly. For example, you might want to check at what height your drone currently is relative to the earth surface. The drone itself is capable of measuring it's altitude, but currently there is no way of sending this data back to the openFrameworks controller application.

For participants without previous experience with openFrameworks, Memo provided an application that accepts OSC messages and allows to create a drone controlling application with any other of the creative coding tools that support OSC message sending. Processing, Pure Data and Quartz Composer are good choices to do that. The ready-made application acts as a proxy server between the drone and custom application.

Raspberry Pi is a small computer that can be easily kept in ones pocket. It runs Linux, it has all the necessary ports a personal computer usually has, so you can connect a screen via HDMI connection, a mouse and keyboard via USB connection, network via ethernet or wi-fi connection and you can even drive simple DC electronic devices by using the built-in GPIO pins.

This workshop was more like a lecture where the participants were introduced to different ways of Raspberry Pi usage for audiovisual applications by using the openFrameworks creative coding framework.

One of the most interesting examples was multi-screen generative content installations. To make this work, one needs to have a master Raspbery Pi and several slave Raspberry Pi's. The slave Pi's are connected to the master Pi via OSC connection. Master Pi acts as a master timer and it sends time and other necessary variables to all slave Pi's over network. On all the slave Pi's there is the same application with different screen ID that is used to determine which part of the applications viewport to render and display on the screen.

Raspberry Pi has a very good hardware video decoder that is based on the h264 video codec. That makes it a very cheap and flexible video playback device. Furthermore, with openFrameworks you can capture individual frames of the video, copy them into a texture object, modify and combine the result with other graphics drawn in openFrameworks.

The combination of openFrameworks and Raspberry Pi is still in it's early stages, but still it is already possible to connect a camera as well as a Kinect device to it and analyze the captured data by using openCV. Usage examples shown by Andreas Muller and Jason van Cleave made it clear that openFrameworks and Raspberry Pi really work and that it is a real solution for complex visual solutions that are limited by a relatively low budget.

Peter Kirn is an audiovisual artist, technologist, and journalist. Classically trained in composition and piano, his music and visuals meld minimalist and experimental dance music influences with a focus on texture and abstraction. He also writes about technology and creativity, primarily as the founder of widely-read daily sites Create Digital Music and Create Digital Motion. (He has also contributed to Popular Science, Make, Keyboard, Macworld, and DE:BUG, among others.) He teaches and develops free technologies for creative coding and creation, and is co-creator of the open source MeeBlip hardware synth.

Peter's workshop was about connecting audio and visuals by using Pure Data, Processing and OSC. For the most part it was about building a step sequencer in Pure Data and changing parameters in real-time. Peter showed different Pure Data tricks that can be used for sound generation and processing.

OSC or the Open Sound Control message format is a next generation MIDI protocol that allows to connect different kind of software and hardware. If in MIDI there is a predefined set of notes and their properties that can be sent from software to hardware and vice-versa, then OSC gives the possibility to define as many notes or commands as you want by assigning different kind of values (int, float, boolean, lists) to addresses like /myosc/keyboard1/note1.

In this case it was the visual sketch that was made in Processing and the audio software that was created in Pure Data. Both, Processing and Pure Data, support sending and receiving OSC messages and that makes them perfect for making synchronized audiovisual instruments.

Peter was also telling about historical background of the different electronic music creation techniques available today. He told about first digital music synthesizers and softwares, for example, a story about Max Mathews who created the first digital audio synthesizer and unit generator as well as Miller Puckette – the creator of Pure Data itself.

Most of the participants had previous Processing background and that was the reason for focusing on Pure Data during the workshop.

One of the most interesting and inspiring talks during the Resonate 2013 festival was the one of Memo Akten. Memo is a London based visual artist that works with code and technology and as he states everywhere – he likes to touch people. Not the physical touching but touching in spiritual and irrational sense. He was talking about the importance of numbers and precision within artworks that is necessary for triggering emotions.. touching people.

Many have been asking Memo about solving the difficult aspects of the very complicated projects that he has been working on. His solution to this is taking baby steps, meaning, that one has to set small reasonable goals in order to get a complicated project done. If you focus on the big picture for the whole time, most probably you will get scared and will tell yourself that this is something impossible.

Memo talked about his previous experience and how he arrived to working with creative applications. He actually has a BA degree in Civil Engineering. After getting that, he escaped from Turkey to London where he started to work as a game programmer. Once he felt that the game industry is becoming too big and uncreative, he escaped again. Since then he has been experimenting with creative coding and is making different kind of instruments for visual and auditory expression.

Casey Reas is one of the founders and main developers of the Processing creative coding framework. His talk was about the four main things that he has been doing for the past 10 or more years:

Casey told about his idea about software artist studio that can be location independent. He was comparing the studio of today's software artist to several painter studios in the past. Processing and the tools alike would be the core of such studio. Art pieces that would be made in this kind of studio for the most part would have a beginning, but not an end.

He also advertised the book Form and Code in Design, Art and Architecture that he wrote in collaboration with Chander McWilliams. It is about the possibilities that coding gives to shaping form in the mentioned fields through examples and advice.

Casey promotes a different art + technology approach. If before there was the artist and the scientist - now there is the artist and accessible tools. In his opinion every designer nowadays has to have understanding about programming. If the user is not able to shape his tool - another person is affecting the final outcome - maybe even more as the artist itself.

Another interesting talk by Spanish 8bit visual artist that is focusing on storytelling in text mode - ascii, petscii, and so on. Raquel has background in photography and she is currently based in Sweden.

When Raquel jumped in to the demo scene, she started to draw characters with symbols for her animations. She is not a coder, but an animator with high love towards traditional animation. Her partner, who is a programmer, made a program for her that runs on the Commodore 64 computer. With this program she is able to draw characters with keyboard in a pixel by pixel way. Afterwards it is possible to do frame by frame animations with these characters.

Lately she is performing live during real-time performances together with sound artist Goto80.

These were just few of the talks worth mentioning. Another interesting part of the festival was the screenings. It was possible to watch the movie The Indie Game that is a realistic insight into the life of indie game developers.

Worth mentioning is also the movie's Clouds beta release screening. As said in the description, Clouds is a documentary featuring prominent media artists, hackers, and critics in conversation about the creative use of code, the future of data, interfaces, and visual technology. The creative practitioners featured in the documentary represent a new breed of interdisciplinary artists who combine software engineering, audiovisual design, and cultural engagement. Clouds explores the themes of creativity, aesthetics, simulation, and sharing articulated by these luminaries in the computational arts community.

To sum up - Resonate 2013 were very interesting, valuable and inspiring three days in Belgrade, Serbia. Don't miss it next year.