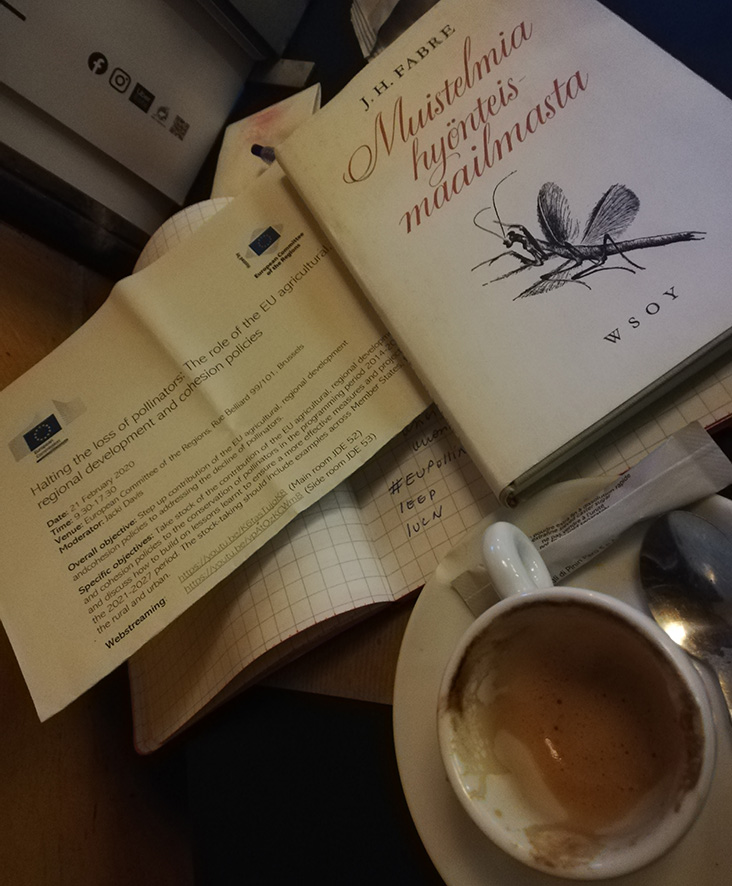 On 21st February, 2020, some hundreds of individuals from different paths of life gathered to Brussels, to the premises of European Committee of the Regions, to discuss about pollinators and biodiversity. The aim was to evaluate the achieved results during past EU funding programs in 2014-2020 and plan the future ones through the lessons learnt. Given the fact that the gathering happened just couple of weeks after very dark research paper was published about the decline of insects worldwide, the declarations were shy and it seemed that the Commission has no urgent plan to act in the following years. Or if there is one, it was not revealed in this gathering.

To have insects around is the matter of life or death, but people seem not to know it

This might have been the strongest statement during the day.

The jargon used in these conferences uses abundantly acronyms, that Commissioners seem to fancy. The message of the functionaries could reach the general public better if less bureaucratic language would be used. I am not asking for such a poetic or literarily decorative expression like self-taught French entomologist Jean-Henri Fabre (1823-1915 ) and his Souvenirs entomologiques (Muistelmia hyönteismaailmasta)*  or his contemporary, Flemish Maurice Maeterlinck (1862-1949), the author of The Life of the Bee are using. But there is a need for messengers and translators between the pollinators and the EU machinery who understand the workings of both parties. In that sense, art and literature are powerful vehicles to create the understanding of the connections between the natural biodiversity and the wellbeing of the pollinating insects. 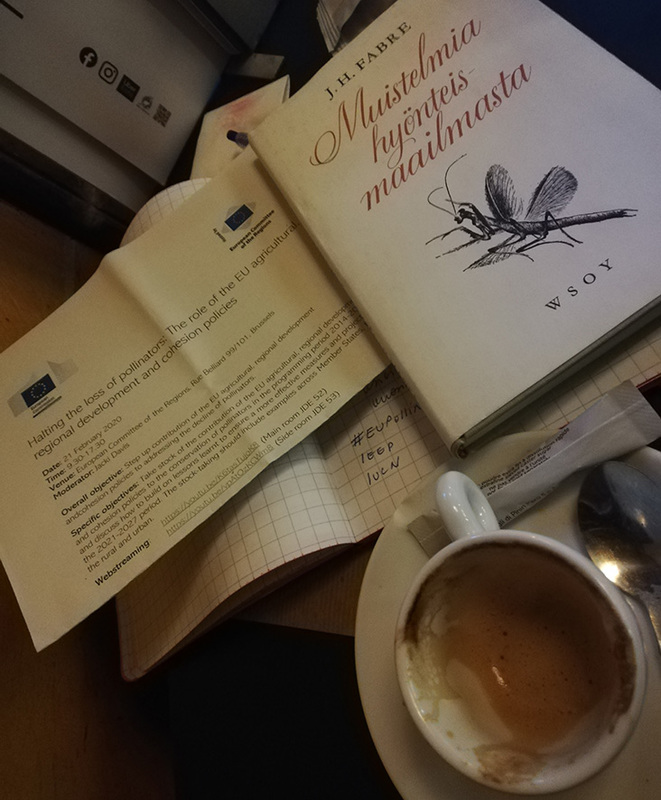 Through the funding instruments that EU is offering, the action is slow, and supports more heavy administration than better environments for pollinators and other insects. Urban initiatives, ONGs, and individuals have other ways to act: here a list of ways to promote and help insect life where ever you happen to live:

2. Plant native plants; many insects need only these to survive.

3. Avoid pesticides; go organic, at least for your own backyard.

5. Build an insect hotel with small horizontal holes that can become their nests.

9. Be more aware of tiny creatures; always look on the small side of life.

Melliferopolis program implements since 2012 urban interventions connecting bees and arts. In our future activities we are expanding our area to cover all the pollinating insects and endemic melliferous plants. In the next summer season Melliferopolis continues occupying a part of Tarja Halonen park at Linnunlaulu district of Helsinki with an installation Hexa-Hive village and Airstrip for Pollinators and will also be participating the Mänttä Art Festival.

At the Tarja Halonen park next step to take is to convert the current small area of flowering, mostly endemic varieties of melliferous plants to a bigger meadow. The negotiations towards this move have started and hopefully the city meadow for pollinators and other citizens can be admired in the following season 2021. Similar meadows have been established for example in Tampere, where Villi Vyöhyke / Wild Zone people have been busy in changing the dull urban lawns to blooming meadows.

My suggestion is also that EU nations would offer for the citizens a stock of local seeds and shovels, and promote guerrilla gardening for the sake of insects, pollinators and rest of the living beings.

We all know what we have to do so let´s do it!

*Souvenirs entomologiques (Muistelmia hyönteismaailmasta)  is a literary work written by French self-made naturalist J.H.Fabre between 1879-1920, in the end of his life-long dedication to the insect world. In these books he introduces the reader to poetic “biographical” and reflective essays of a selection of the insects, based on his observations.