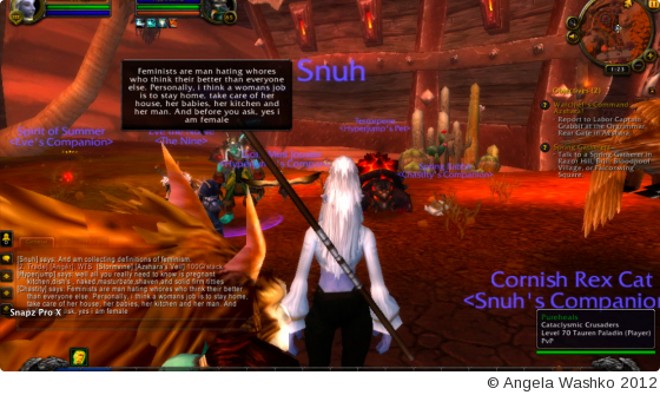 What does World of Warcraft, the massively popular multiplayer online role-playing game, have to do with feminism, public space, and performative artistic practice? HIAP Talks in March will investigate the gendered virtual spaces of video games.

New York-based artist Angela Washko (b.1986) will give a talk on her investigations into and performances within the particular political space that evolves in World of Warcraft. The talk will be followed by a panel with invited commentators who will bring into the discussion viewpoints from recent game research and development.

“I am creating videos from performances inside of World of Warcraft that investigate the relationship between female players and the intensely complex social communities within WoW. I am working on instituting a system in which players in my community are forced to take responsibility for their oppressive behavior, help to create an environment that encourages women gamers to participate, and present performances and videos to a public that is unaware that these communities exist”.

With over nine million subscribers, World of Warcraft “is its own form of public space realized virtually”. According to Washko, it is also “a space in which the suppressed ideologies of a politically correct global society flourish.” The blatant discrimination, homophobia, and extreme sexism are not a result of the developers’ aesthetics but the community of avatar-hidden individuals that play it. In her performances Washko discusses feminism with players inside the game situations. In her work she also scrutinizes the negative gender-based stereotypes throughout the video games that she grew up playing.

The event is part of HIAP Talks: Public Matters, a series of debates and dialogues that focuses during 2012–13 on the acute concerns around the changing notion of the public and, in particular, its manifestations in and impact on the field of contemporary art. The invited international speakers bring to the table different critical perspectives and creative approaches, which allow insights into the practices and politics that affect our understanding and inhabitation of the public today.

The series of monthly talks is curated by Taru Elfving and organised by HIAP (Helsinki International Artist Programme) in collaboration with Kiasma Museum of Contemporary Art and other partners. They take place at Kiasma seminar room with a few noted exceptions.