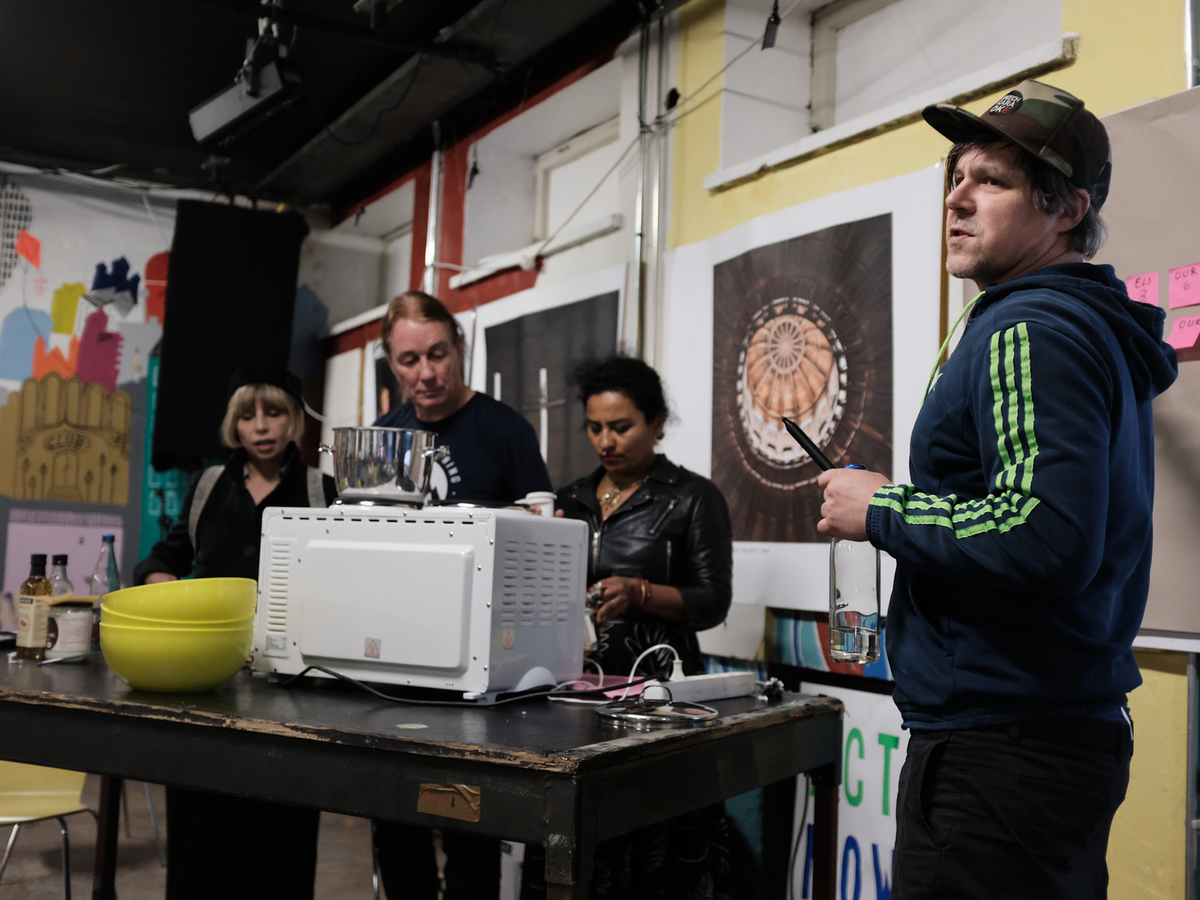 During this year’s edition of the Pixelache Festival Owen and Oliver conducted a curious workshop. It combined two seemingly disconnected activities: Making DIY Facecream and Making Collective Decisions. Within the framework of Convivial Mechanics this combination nevertheless made perfect sense. Both activities try to understand the "recipes" or the "source code" of making things: material things like face cream or abstract things like decisions. If you understand the "source code" you can hack, adapt and improve those "recipes".

What do we mean by Convivial Mechanics? According to a definition we wrote elsewhere

Convivial mechanics names a hypothetical branch of science and artistic research that explores the existence of natural limits on human behaviour, both material and social; researches the implications of conviviality for cultural democracy; and applies this to the design, construction and operation of digital tools that will serve the aims of a reborn and convivial sufficiency.

Owen surprised the crowd by demonstrating the making of a green tea flavoured face cream with a cheerful cooking show eloquence. He also surprised everyone with a collective realisation of how simple a process you need to make face cream, or in fact any cosmetic cream. He used a recipe that he had combined from several sources that he had found on the web. The basis of this combination revolved around the possibility of sourcing all the ingredients locally or from local shops.

While the freshly cooked cream cooled off, the workshop headed into more contested waters. After Oliver introduced two models of collective decision making process - including the major pitfalls or traps that can lead to poor decisions - everyone present tested several methods. The group had a task to collectively decide how to spend 100 EUR. They could choose to spend the money within the group; to donate it for a cause; or to devise something completely different.

The first method used involved 1 person one vote. The second method involved dotmocracy in which each person has 3 votes. Both methods produced the same winning decision: to spend the money within the group. Interestingly the proposal that received 0 votes with the first method, became a close second under the rules of dotmocracy.

In the second phase each participant made one concrete proposal about how to spend the 100 Euro. Proposals ranged from "distribute the money evenly between the group" to "buy icecream" to "buy beer and gasoline, drink the beer, make molotov cocktails from the empty beer bottles, and start a riot" We then attempted to test two decision making processes. First we played Instant Run Off, which starts with 1 person one vote, after which the two proposals with the most votes face off in a second round, where again everyone has one vote. This process seemed to go smoothly and we produced a winning proposal without major issues.

The second decision making method focused on a consensus process. It immediately became apparent, that the previous decision reached through the Instant Run-Off actually actually had only lukewarm support in the group. Participants then divided into two groups in which they discussed their individual proposals to see if they could combine them, or to see if new collective ideas would emerge. The new or modified proposals then got written on a gradient of agreement scale.

Each participant could vote on each of the proposals and mark their support for each proposal. Since the gradients of agreement included a BLOCKING vote the process drifted apart and became a blocking game.

Whenever an agreement on a proposal occurred, one participant chose the block option.  Since no agreement could arise the appropriate decision would have involved letting things cool off for a while and then meeting later to restart the process. However since we had a deadline, the second best choice would have involved picking one of the proposals by random.

Eventually we decided by dictatorship. Oliver gave the money to Timo to buy something for everyone that they wanted from the shop. It seemed the most obvious solution, and in that way the process failed, since it did not produce a surprising outcome.

So what did we learn from this experience?

.25 oz (by weight!) bees wax. Grate the wax, or you can buy it in pellets. Avoid wax made for candles, as it can be mixed with other things and be scented. 100% pure bee wax is what we’re after here.
1 oz almond oil (I order on Amazon)
1 oz coconut oil
1/4 tsp Rose Hip Seed Oil (I got mine at Amazon)
1 packet organic green tea
Sterilized container to store lotion in
A chocolate melter or double boiler
A deep, heavy cup and a hand mixer
Fine sieve or tea strainer

How To Make It

Clean and sterilize all of your equipment. This lotion has a longer shelf life because it is oil only, but we don’t want to create a breeding ground for bacteria.
Combine wax and oils in a double boiler or chocolate melter. Allow everything to melt together.
Open the tea bag and pour loose tea into the oils. Let the mixture warm and extract from the tea for 15 minutes.
Strain oil mixture through a fine mesh sieve into a deep cup. (I used my pyrex measuring cup.)
Whip the mixture with your hand mixer, periodically scraping down the sides, until lotion is room temperature and creamy.
Store green tea face cream lotion in a cool dark place. Keep in mind that lotions have a shelf life. Do not use anything that looks or smells wrong. That said, oil only lotions have a very long shelf life.

LESSON 1: one person one vote in a democracy can really prove misleading about the group’s preferences.

LESSON 3: More time doesn’t help per se. The consensus process needs to be well facilitated, it doesn’t just happen by itself. Especially it needs to have good tools for transforming the the initial individual ideas into more interesting and diverse collective ideas.

In our case this process was not especially facilitated and we had little time, which created confusion. In a consensus process a certain level of frustration and confusion might prove inevitable and even desired, because of a wide range of ideas and proposals and a long deliberation process. However this process must find a closure in which divergent opinions come together in a satisfactory conclusion.

LESSON 4: A consensus process may not always prove desirable, especially with a deadline looming, or with little available data. In such cases a random choice might prove better for the group dynamics.

LESSON 5: Gradients of agreement offers a useful tool to visualize the preferences of a group,and proved far better than Instant Run Off or dotmocracy.

LESSON 6: If we attempt to build a consensus, the BLOCK option in the decision making process needs careful consideration, because it can lead to troll behaviour, and as a result to deadlock and frustration.

We should regard it as the "nuclear" option, used only when the group has really grave concerns. Also,  someone using a block vote should have to substantiate it, and give reasons that allow the group to address the concerns of the blocker. Someone might then modify the proposal and call for a re-vote. We could then consider that, in this second round of voting, the vote of the original blocker counts as a simple disagreeing vote. In this case the strict consensus changes to a super-majority vote.