Her artistic practice is informed by a professional background in dance which carved a resilience to being shaped and reformatted continuously. This malleability, juxtaposed with an interest in the potentialities of ‘presence as a catalyst’, has fueled a yearning for transfiguration and transgression of accumulated relational patterns. Through exposing herself to less familiar media - painting, installation, video - while following a self-reflective approach, Ingrid explores the vulnerability of moving beyond certainty and preconception. Besides her own artistic practice,

Ingrid is currently co-directing Topographies of Silence, a research and performance project in collaboration with artist Gabriele Goria (IT/FI) as well as being one of the performers in A Human Ensemble, a project directed by choreographer and psychologist Karolina Ginman (FI). Previous collaborations include working as a choreographer in Adel Abidin's work, Yle Finnish broadcasting company, with drawing artist Vappu Rossi and as a perceptive movement facilator in different studios in Helsinki and Brussels.

Ingrid André is based in Helsinki since 2006 where she lives with her teen daughter and an adopted cat. 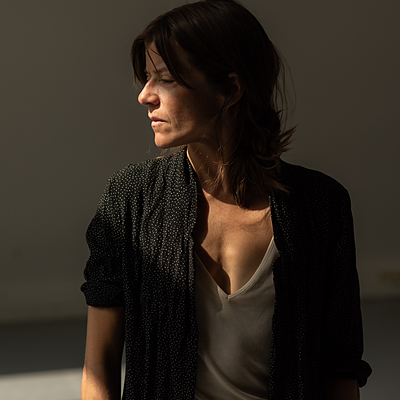