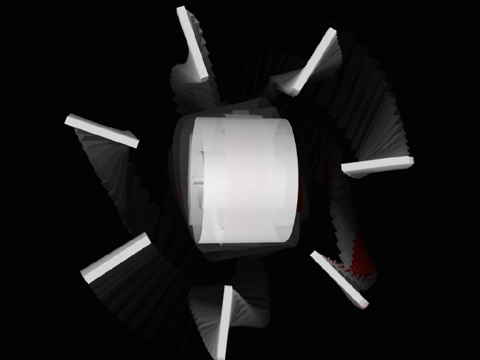 chdh has developed a body of work from theoretical principles which makes possible the creation of a live, real-time, audio-visual performance based on about thirty instruments. These instruments are made of generative, stochastic or physical modelling algorithms and each of them control a sound and a visual element.

With mathematical algorithms as well as physical modeling for the real time generation of control data of an audio/video synthesis, chdh brings a new vision of the data-processing use of tools in musical creation. The use of instruments having an audio component and a video component, controlled by the same parameters, allow an effective management of the audio-visual relations. This project required the development of a virtual world made of abstract creatures, more or less autonomous. During a performance, chdh plays with these « instruments », in order to make them react both visually and aurally. Two musicians, connected through a network, interact on the same interface with motorized MIDI faders. Each instrument, or « patch », can then be played by one of the two musicians or both simultaneously. They handle the instruments by using an abstract layer which modifies the parameters of the algorithm. Each algorithm then creates data used for the synthesis of video and sound, giving a strong cohesion between the two media.

Aesthetic of video and sound is minimalist: sines, diracs and noises interacts with cubes, spheres and other 3D primitives forms in a black and white environment. The different instruments make possible the creation of a solo / accompaniment musical structure; to let the audience discover the intrinsic bonds between image and sound as well as to create a polyrythmy by playing on the visual and sound space granted to each instrument.

Movement as a mean of expression

Music makes no sense in immobility. Its only way of existence is its association with temporality in evolution. Movement is the source of creation. A static matter outputs no energy. The movements and deformations of matter give life to it, making it sensitive and communicating. Structure of movement is more important than matter. It overdetermines form. Movements have their own identity, in a similar way than a sound or an image can be identified, a behavior can be understood as it reflects a reality that everyone experiences.

Xenakis has based his music on mathematical principles such as set theory, symbolic logic and probabilities, that strive for a goal : the stokhos. He used random processes at some stages of the composition, controlled in a way that the produced music is totally written. Xenakis used complex algorithms with simple synthesis to allow a simple but powerful writing. This principle can be extended to other kind of synthesis and algorithms.

Complex and precise relation between sound and image:

“With numerous examples, analysis and experiments, we have shown that we can’t study the sound of a movie isolated from the picture and vice versa. Their combinaison produce something completely new and specific, that could be compared to an interval or a chord in music.” Michel Chion, 1998

The link between sound and image is a field of experiments and research in which artists explore the possibilities offered by the relations between these media by playing on the precision and complexity of their connections.

“When new instrument will allow me to write music as I conceive it, taking the place of a linear cunterpoint, the movement of sound masses, or shifting planes, will be clearly perceived. When these sound masses collide the phenomena of penetration or repulsion will seem to occur.” Edgard Varèse, 1962

Work with physical modelling allows a natural and instinctive relation between the instrumentist and the virtual object he controls. Each instrument has an energy and structural coherence that call our perceptive experiences to project us in its reality.

In order to allow representation of fast and complex movement, the generated image must be of very good quality (50 images per seconds, the resolution being limited by current video-projectors). The chdh project is based on two laptops connected by Ethernet for the exchange of control data generated by the musicians.

The programming environment of chdh is the free software Pure Data (pd), which is the principal source of inspiration and exploration, as the chdh members are involved in the use of free software as well as in the development of two physical modeling library for pd: pmpd and msd (respectively under GPL and LGPL license). The visuals are supported by GEM: an OpenGL library for pd. Other pd externals are used (zexy). A special attention is paid to the portability of the patchs in order to remain independant of the computer or its operating system.

chdh was created in 2000, from the complicity of the two brothers Cyrille and Damien Henry during musical improvisations mixing laptop music and analog synthesis. In 2001, the group’s work got directed towards a performance connecting electronic music and juggling, in which embedded sensors on a juggler enable a musician to create sounds that evolves with the movements of the balls. Following the production of a self-released album of improvised electronic music « Chaos and Dharma » in 2002, chdh focused on the relations between image and sound, in particular with the use of the pd software with the GEM library.

Since 2003, chdh presents its work in various places (IRCAM, Noumatrouff, gaiete lyrique, pd convention, P1K53L festival). In 2004, the group made a residency at the arts centre Confluences which led to the creation of the sound & video installation Cinéradian, and a series of workshops. In 2005, Nicolas Montgermont succeeds to Damien Henry for the live project, Damien devoting himself to a new project.